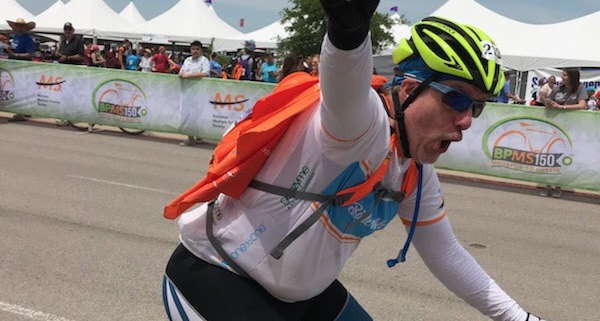 In honor of World MS Day and the Texas MS 150, Jeff Armbruster, VP of Sales & Marketing at Landpoint, has bravely chosen to share his story of life with multiple sclerosis. Jeff will be riding the Texas MS 150 virtually this year due to COVID, raising funds to help the MS Society find a cure for Multiple Sclerosis. If you would like to follow Jeff’s MS150 journey and help him reach his fundraising goal, follow this link.

“October 14th, 2009 at 1:30pm, my family’s life changed forever when I heard the words, ‘You have MS.’ In January of 2009, I shoveled snow at 5am before a trip to Houston and felt a pop in my lower back. I went on my trip and then to a doctor who diagnosed a ruptured disc. Through therapy, I was able to walk the stage at graduation in late April. On Friday before Memorial Day, I picked up a cooler while loading my truck to take the family to our campsite at Atwood Lake when I felt a bigger pop in the same spot. We had our holiday, but the pain was terrible. Tuesday following the weekend, I had to leave for a business trip to Houston again. My flight through Atlanta was delayed, so I had to run through the airport to avoid missing my connection. Wednesday morning, I woke up to discover my right foot was numb. Each day, the numbness moved up my leg until it got to my waist. My flight back from Houston was late by 2 hours, thanks to an accident at Atlanta’s airport. I was forced to run through the airport again to avoid missing the last flight back home. Saturday morning, I woke up completely numb in both legs from the waist down. Back surgery to repair the disc was scheduled for the earliest possible date, July 5th.

The surgery was successful, but my legs barely improved. On July 15th, I was allowed to take my first shower, so I turned the water as hot as I could stand it and enjoyed the water hitting my back. I got dressed and tried to walk to the mailbox and made it about 10 feet from the front porch when I felt a tuning fork sensation run down from my lower back to my toes, and my legs quit working. I had to grab my knees to stop them from collapsing, and I yelled for help. After that day, every time I took a shower or got overheated, my legs would stop working. New symptoms started whenever I took a hot shower or got overheated. My entire body would vibrate furiously, and I would have to lay down. I would sleep for hours, even after sleeping through the night. I walked incredibly slow and could only take a few dozen steps. I drug my left leg. I would have to sit and rest before going further. I begged my doctor to do something, telling him that something else must be wrong. He continued to blame it on the potential damage to the nerves as they spilled down my legs as they exited the spinal cord. He kept saying that I would have to learn to live with it. But, the symptoms worsened, and I began to feel excruciating pain in my legs. I now had insomnia and incontinence. I was begging all of my doctors to do something.
I finally convinced my primary care physician that something was seriously wrong, and he scheduled another MRI for me. Since I had an MRI prior to my back surgery, they moved up my spine one level from the lumbar area to the thoracic region. The MRI showed a lesion at the T-10 vertebrae area. He sent me to a neurologist who ordered three more tests; an MRI of my entire spine and brain, an evoked potential test, and a spinal tap. The MRI showed twenty lesions in my brain and two in my spine. The evoked potential test was normal, so my Optic Nerve was okay, but my spinal tap showed anti-body markers for MS. On October 14th, I learned that I had Multiple Sclerosis.

On October 15th, 2009, every day after that started with a shot. I was giving myself a drug to stop the progression of MS. While I didn’t get new lesions, the injections didn’t work. My symptoms increased, and new ones started. I began to get debilitating cramps in my feet, toes, and calves, so I started a new drug to relax the muscles. In 2012, I started a new disease-modifying therapy that required an infusion every 28 days. I was so relieved to not start my day with a self-administered shot. After encouragement from my wife, I started another drug that was a twice-daily pill that was supposed to speed up how fast I walked. Eight days later, I could walk at regular speed. These two new medications had an amazing effect on my MS. In 2014, I was finally able to walk the track at a WalkMS Event. I stopped using a wheelchair for good in November 2014. Then in 2015, I rode 25 miles in my first MS150 bike ride. By 2017, I was riding the entire route from Houston to Austin. In 2012, I was invited to join the MS150 steering committee as its scribe. I was also a committee member for WalkMS and a top fundraiser.

While I was able to get better, many of my friends living with MS got worse. It’s the slow disability that builds with a chronic disease like MS. Several chose to end their lives because of the severe depression caused by MS and the pain that many suffer. With some, their MS turned from Relapsing and Remitting MS (RRMS) to Primary Progressive MS. Two-thirds of those diagnosed are women. In addition, there is a higher percentage of veterans returning from Vietnam and Gulf War I than are diagnosed in the general population.

Researchers still do not know the cause of multiple sclerosis. In honor of those battling MS, I will continue to work for a cure as long as I am able to.”

In honor of Jeff Armbruster, your contribution will support groundbreaking research and life-changing services for people living with MS. With your help, we’re one step closer to a world free of MS.

Your generosity makes a big difference. Together we’re changing lives.

See All Articles
What Should You Look for In a GIS Mapping Services Provider?